Built the social media command center product from concept into multi-million dollar product line that worked across Sprinklr’s entire set of data and analytics and was deployed by dozens of Fortune 100 brands into brand command centers, executive screens, events, and in retail stores. 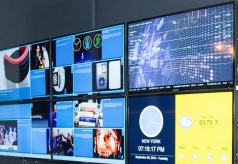 Completed installation, social listening design and initial storyboarding with my team for 50-screen deployment in Sprinklr HQ at the centerpiece of 2014 Voice of the Customer tour.

Worked with dozens of clients on feature upgrades and installations including building partnership with Ideacage for hardware installation.

Worked with RNC on v1 prototype of their social media command center and listening deployment for the 2014 election. Their installation was featured in this article:

This site uses Akismet to reduce spam. Learn how your comment data is processed.